About the begin of WW II, AEG brought on the market their portable Magnetophon type K4

As to allow for continuous play- and recording you necessitate two tape machines. 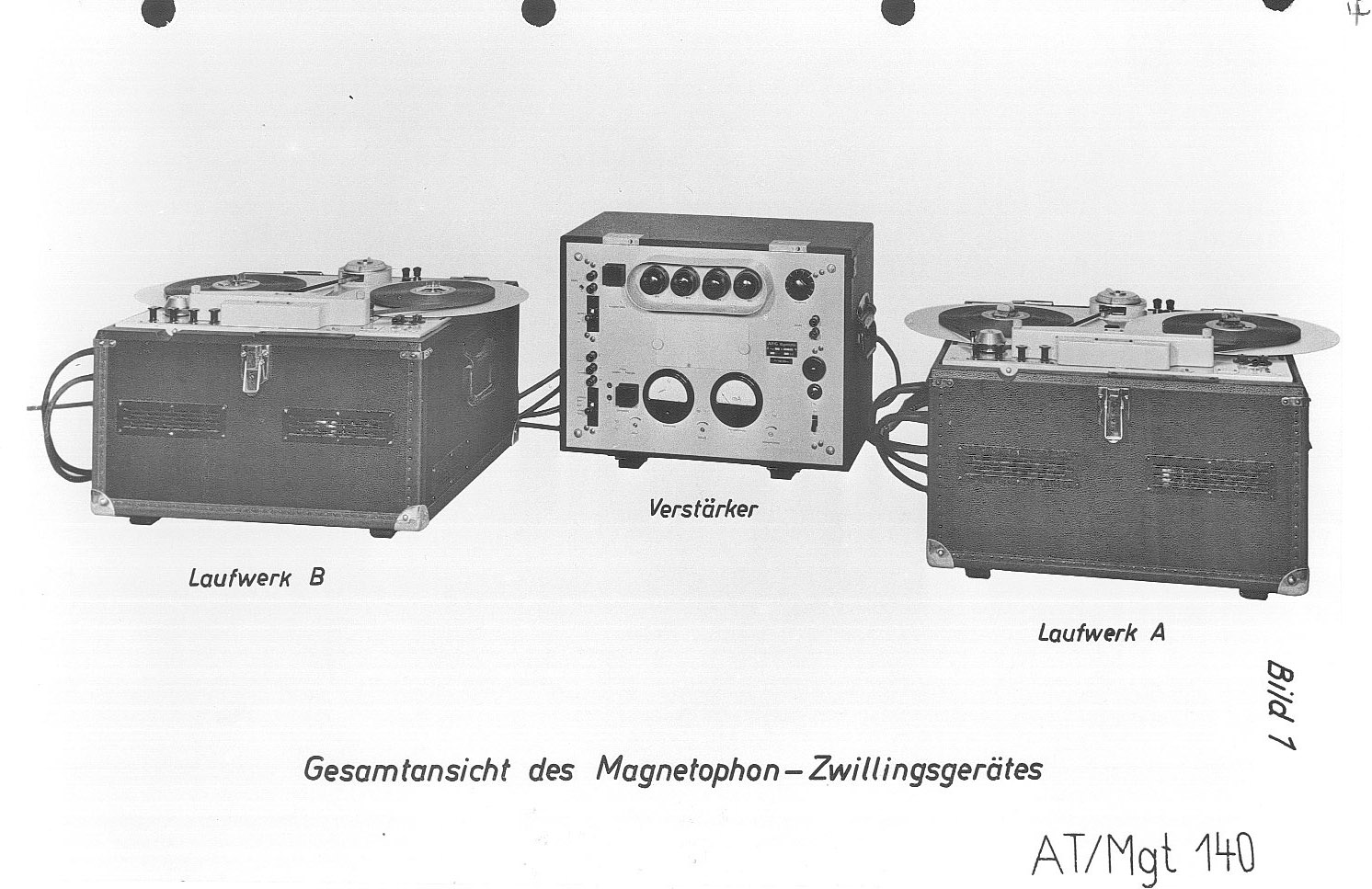 The RRG, the Reichsrundfunkgesellschaft (call it the German equivalent of the BBC) developed, under their own control, special machine types, some known as R122a apparatus.

However, as to allow for continuous play and recording one need at least two machines.

Similarly existed for replaying record disks. The difference, was, that these record types had been supplied in a different numbering sequence. Regularly, everyone will remember, that when the record reached its end (conclusion) one had to turn the disk as to continue playing. In broadcast studios their record disk-sequence-numbering differed, as the second turn-table was fit with the proceeding disk succession. Let us consider record disks had been numbered 1 - 3, 2 - 4 etc; maybe another sequence might have existed as well. At start: turn-table A was prepared for disk-side-number 1, whilst turn-table B carried disk-side-number 2. Continuous operation depends on the skill of an operator, good trained men could minimize sound-gaps (some even hardly audible). 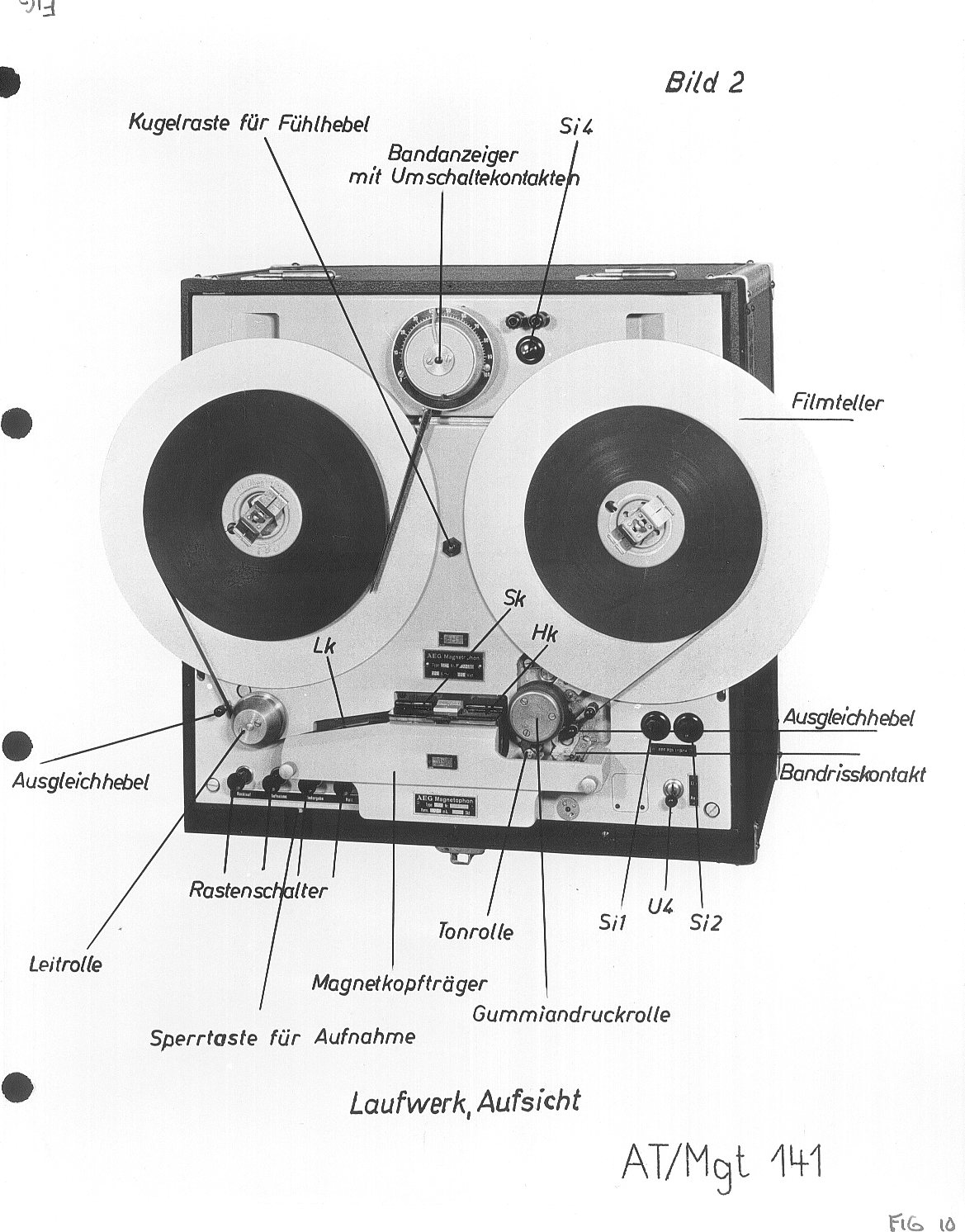 Those acquainted to the era of tape-recording, will admit that for decades since tape-recorder machines looked like the shown Magnetophon type K4 configuration

It is like the one who invented and/or introduced the first useable motor cars (think of the famous T-Ford); since all successor types keep something in common with the foregoing types (like DNA).

The driving motors look quite rugged. Operating three motors - two meant for winding the third one driving the capstan

Such elaborated figuration was, for many years after the war, still quite unusual for consumer products.

Maybe not well known nowadays, but in the rest of the world, by then, nothing comparable existed; but wire-recorders or the Philips-Miller system, non could beat the (versatile) Magnetophon reproduction quality. It has to be noticed though, that the real boost came after Braunmühl and Weber developed their RF erasing- and recoding bias (1940). Albeit, that there existed an US patent of earlier date, but Braunmühl and Weber also determined the involved fundamentals on which it all is based. Therefore, they should be considered being once the "inventors" of RF techniques in respect to tape recording.

Please notice behind her left hand the group of sound 'faders'. Once known as 'Profilregler' likely of type W 24a; which were still operated in the 1950s and some even in the 1960s.

Such dual-configuration allows for continuous recording- as well as play-mode operations.

before closing this webpage, let us consider the outline of German professional sound faders; by the way, in those days, quite uncommon devices in regular sound- and broadcast studios, elsewhere in the world.

This is how it looks like in- and outside: Aus means off; interrupting signal in- and output

(with courtesy of Mr. Gerd Kuper, and the AST group of the NDR Hamburg)

The tiny circular devices (bobbins) constitute bifilar wire-wound precision resistors. Bifilar windings are commenced as to counter self-inductance. In the middle the wire is bended such that it continuous where it originated from (of course, ending at a different soldering point). The actual currents are therefore being directed in an opposite manner; the resulting field-flux is by this means cancelled, hence its inductance nullified. An inductance would constitute a frequency dependant impedance; causing by its complexity an uncontrollable device.

Generally, wire-wound resistors for broadband applications, like is audio, are regularly of the so-called 'bifilar' type.

Viewing a W 24a differently

(with courtesy of Mr. Gerd Kuper, and the AST group of the NDR Hamburg)

It isn't difficult to understand their mutual interactions

1 Neper equals the level of: 8.6 db, according this scale is should be 8.7 db, maybe this is due to neglected additional figures.

The interesting feature of such kind of sound 'faders', is, that their output impedance remains more or less constant (200 Ω). Hence, the proceeding circuit does not need level "level vs frequency" compensation

Please notice its 'T' type resistor configuration; where all three being controlled in a particular pattern (interaction). 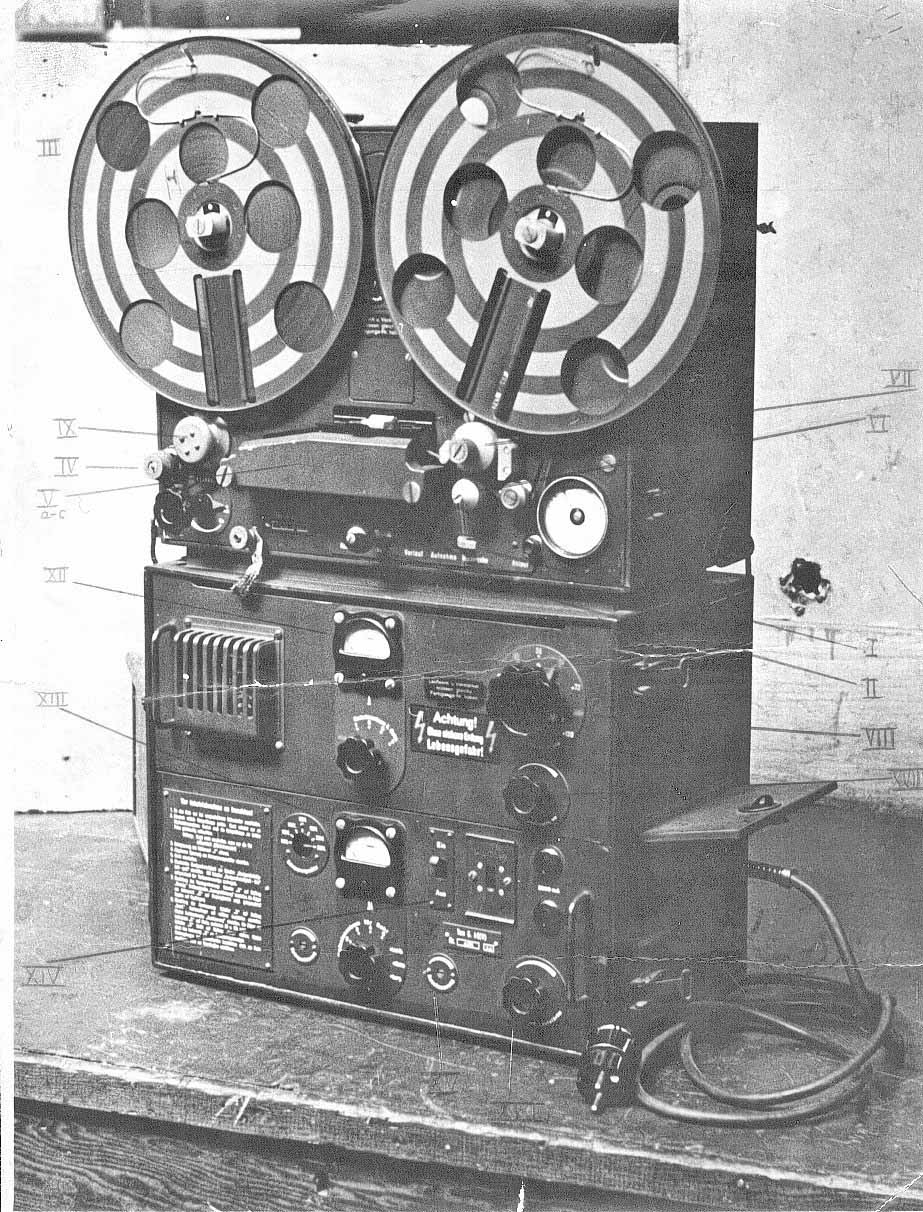 This recorded had been designed for military applications. It was a quite advanced machine, allowing controlled (synchronised) tape-speed between 120 cm/s up to 9 cm/s.

However, the German military sound recorders had been fit with DC bias and erasing, causing a bit higher noise level.

Nonetheless, it was facilitated with a rotating expander-head, consisting of a rotating 4-head-assembly.

Reducing, for example, the speed of intercepted transmissions, the replay pitch can be manipulated over, say, 1 : 4, when voice being involved; CW signals over a higher ratio.

For those interest in the history of Magnetophon apparatus, please notice also the proceeding reports: